Slacker had a slow time off the start. Conducting Rabbit duties, I stayed to the right in lighter air as the fleet stayed on the favored tack. Then I noticed the kelp trailing off my rudder. A few boat languished in the back, including Tenacity who also had kelp, Grace, and Slow Poke who also decided to go right. I climbed down the stern to do what I could about the kelp, but Slacker never felt quite right beating out to the island. Tenacity backed down and took off, soon out of sight. As I approached the island, Thriller and Rubicon were dueling it out well ahead, while the Pogo2’s and Grace were in my neighborhood.

I struggled to tack cleanly with my 150 genoa and did a few doughnuts near the island, but eventually made it around with Grace close behind. It was good to crack off down the backside! Gybing off Sutil, it took maybe 20 minutes to finally get the spinnaker up and get going to the West End. For the first time, I paid attention to the T-Ten polars in the fluctuating winds. As the wind lightened, I reached up and trimmed the chute in, and then as the wind increased, I reached off below course and worked the sheet and guy most of the way back, until the wind nearly died and went to the North. I dropped the chute and proceeded under genoa for the last few miles, finishing well after midnight. Picked up a mooring at Emerald around 2:30am. Had a lovely morning with Team Open Sailing, Slow Poke and Tenacity at Emerald, then sailed home in 4.5 hours with 15-20 knots on the beam. Of course, Jerome did it in 4 hours. 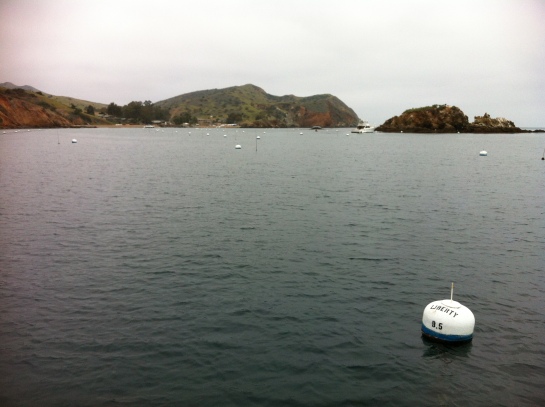 Emerald Bay, Catalina the Next Morning