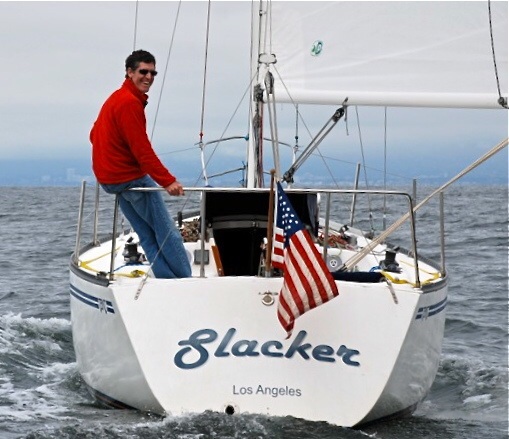 Slacker is officially for sale. There are things I’d like to do, and Slacker does not fit into those plans. She’ll be a great boat for someone – and a great deal as she’s all sorted out.

The last hours of the race were pleasant and thankfully uneventful. The leg from Avalon to Marina Del Rey was done through the early hours of the net day, with a robust amount of shipping traffic that kept me attentive through the night.

But I suspect you really want to know what happened when all the wind hit the fleet down at the island, so here goes.

Towards the end of the usual light air down at Island, I found myself gybing the tacked Ayso downwind. The wind was 2-3 knots out of the South as I struggled back up the East side of the island. The water started agitating more and more and I could see the wind was going to hit shortly. I quickly removed the #1 and up came the #3. Down came the spinnaker and in went 2 reefs. I should point out this all happened in maybe 5 minutes. Then the wind hit and Slacker started upwind. Rubicon picked up the wind a few minutes later but I rapidly lost track of Rubicon. After just a few minutes the main was down completely, and Slacker was still dramatically overpowered, meaning the wind was well over 35 knots. Heavy water started coming aboard and I really wanted the storm jib up. Monitoring the conditions for a few minutes and mulling the headsail change, I noted the north end of the island was a few miles off to port. Checking the chart and confirming a cove of sorts in the shoreline, I tacked over and sailed to the cove. The flat water there was hard to resist, so I anchored, rested and relaxed to wait out the wind.

Most of the fleet handled the short-lived near gale the same way. Felicita, Voice of Reason, and Libre all anchored at the south end of the island to wait out the conditions. Aeriagne kept going due to a scheduling matter with her crew and raced/motored to San Diego. Rubicon and Grace were the two boats to gut it out, and each won their respective divisions.